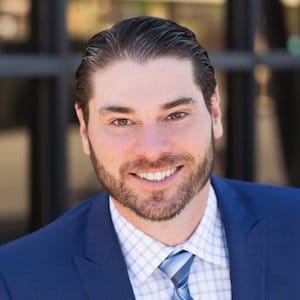 In a nutshell, I am an attorney whose passion is protecting the “little guy” in society. Our office is not afraid of taking on the multi-billion dollar insurance companies or the powerful and influential casinos which often try to avoid liability by “sticking it” to the little guy. We have had proven success against these large corporations.

No matter what the injury, you will be a priority in our practice.

There are many Patriots in my family.

My biological paternal grandfather, Vernon Dale Huddleston, gave his life for our country in World War II.  His story is listed at the bottom of this page.

My adoptive paternal grandfather, Daniel Madison Burk, served honorably in the United States Navy in World War II and the Korean War. One of his ships was sunk and somehow he managed to survive the wreckage.

My maternal grandfather, James Raymond Perrin, served in the United States Army and served in Europe during World War II.

I was born in England during a time in which my father served abroad as a Civilian in the United States Air Force. After a few years overseas. My father then accepted a job at Wright-Patterson Air Force Base in Dayton, Ohio. I was raised in a nearby suburb of Beavercreek. As a youngster, I participated in club soccer, track, basketball and wrestling. My first job was working at a local McDonalds when I was 15 years old. I worked various jobs including grocery stores, delivering pizzas and construction.

After graduating from Beavercreek High School, I went on to earn two degrees from “THE” Ohio State University in Columbus, Ohio. After graduation, my passion for the Law took me to San Diego, California to attend law school. While attending Thomas Jefferson School of Law, I was elected Student-Body President.

Despite going to a rather small law school, I was also elected as the National Vice-Chair for the American Bar Association – Law Student Division. This was a tremendous honor as this position was elected by the student body presidents of each law school all across the country. Finally, in my last year in law school, I was also appointed by the Dean to the prestigious Faculty-Selection Committees and the Diversity Committees.

Preparing for my career as a litigator, I was selected for the law school’s Mock Trial  (1st team) I competed in several regional and national mock trial competitions. I also gained valuable courtroom experience by interning for the San Diego Alternate Public Defender’s Office for my last two years in law school. I donate my time and efforts to local veterans and the Paralyzed Veterans of Nevada here in Las Vegas.

In my spare time, I enjoy married life and I am a proud father of two young sons. My sons play hockey, soccer and are learning martial arts. I also play hockey and continue to learn martial arts.

Since 2005, I have been a “Big Brother” for the Las Vegas Chapter of Big Brothers/Big Sisters. My “little” brother just graduated from UNLV.

I am also the President of the Ohio State alumni club of Las Vegas. Our alumni club is extremely active in Southern Nevada. We partner and do philanthropic events with the Ronald McDonald House of Las Vegas, the Paralyzed Veterans of Nevada, United Blood Centers and ServingHopeLV. Go Buckeyes!

My wife is a UNLV graduate. Together, we are doing our best to raise two well-mannered, intelligent, patriotic, and athletic young boys. We are also season ticket holders for the Vegas Golden Knights. We love to support our local Las Vegas community. Go Rebels! Go Knights Go!

On July 4th 1942 eight B26’s were scheduled to attack the airfield at Lae in the early afternoon. The plan was for Lt Krell to lead the first formation of four aircraft, which included Greer, Stanwood and Hayes of HQ squadron while Lt Kahle followed with the second flight consisting of Lts Johnson, Nicholson and Nichols from the 33rd squadron.

Krell arrived over the target at about 7,000′ with Kahle’s formation following some distance behind. Dropping their bombs, Krell’s formation held their altitude, flew easterly then made a wide right turn back towards the shore in the hopes of providing cover for Kahle, whose flight was about four minutes behind. However, Krell’s bombs had alerted the fighters on the ground, and they were climbing to gain altitude just as Kahle’s formation passed over the target at 5,000′.

Everyone felt more secure with the added guns, speed and tightened formation. The Zeros lined up on the right and a little higher in order to get into position for their attack. One attacker Flyer 1st Class Mitsuo Suizu, seemed unusually persistent. Suddenly he headed straight into the formation from the one o’clock position and forced the B26’s to descend. Krell turned slightly to face the oncoming Zero. As it passed over his left side at a closing rate of 500 miles per hour, the left waist gunner, Sgt Norton, sprayed the cockpit with machine gun fire, possibly injuring or killing the pilot.

The Zero shot through the formation so fast that the other planes barely had any chance to react. In a split-second Nichols the left wingman of Kahle’s flight, lifted his wing just enough for the Zero to slide under him. Johnson, in number four position, had nowhere to go. The Zero dived straight into Johnson’s fuselage. For a second the Zero’s propeller engaged that of the bomber, then it seemed that the fighter hit the fuselage and rebounded off to slice of the bombers vertical tail with its wing. The Zero drew away, and for a while the battered fuselage flew straight and level as if nothing had happened. The tail-less bomber continued its forward momentum for a few moments, wobbled, then went into a fatal spin until it plunged straight into the sea a minute or so later. Splashes from other pieces of both planes dotted the surface of the sea. The stunned airmen watched breathlessly for parachutes, but there were none.

Excerpted from: “Revenge of the Red Raiders – The Illustrated History of the
22nd Bombardment Group During World War II”(Eagles over the Pacific, Volume 2)
Authored by: Walter Gaylor, Don Evans, Harry Nelson and Lawrence J. Hickey