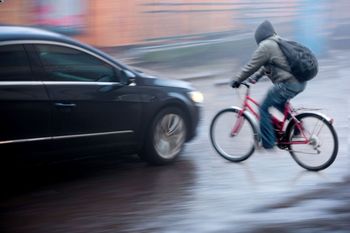 A series of crash tests jointly done by the IIHS, Humanetics, and the AAA Foundation for Traffic Safety proves that even slight speed increases can amplify the severity of road accidents. Tests were done to evaluate the protection that Honda CR-V crossover SUVs starting from the 2010 model offers. The IIHS’s crash tests had originally credited this model with top scores. The model is representative of the average age of vehicles on the roads.

The research team performed tests at 40, 50, and 56 miles per hour in Calspan Corporation’s Laboratory in Buffalo, New York. The team aimed to simulate what happens after a head-on collision, a partial overlap impact between similar-weighed vehicles moving at the same speed.

The Results: Fatalities and Car Damages at Different Speeds

Even small speed increases turned out to have a huge difference in the harm caused to the vehicle occupants. A motor vehicle crash that happened at 40 mph showed a minor intrusion into the passenger area. In contrast, a 50-mph crash resulted in more severe damages and wrecked the dashboard, foot area, and driver’s door opening.

A crash at 56 mph showed the likelihood of severe leg and lower neck injuries and even greater damages to the vehicle. Crashes at 50 and 56 mph forced the steering column of the CRV to move up, causing the dummy’s head to smash against the wheel after going through the airbag. The dummy’s sensors showed a huge risk of facial fractures and serious brain injuries. The research team concluded that speeding accidents often cancel out the benefits provided by safety features, such as enhanced structural designs and airbags.

The faster a vehicle is driven, the greater the chances of dying in a crash and the more severe injuries motorists and passengers are likely to suffer. According to the Insurance Institute for Highway Safety (IIHS), progressive National Speed Law modifications (from 65-85+ mph) since 1995 to date have resulted in about 37,000 more fatalities over the 25 years.

At just 55 mph, a car moving at this speed will travel the length of a football field in about four seconds. In less than half a second, the vehicle would have enough time for an average driver to recognize and react to hazardous road conditions. At this speed, a car can travel nearly 200 feet in total before stopping.

At speeds over 70 mph, even the best drivers can barely stop their cars within the distance they can recognize hazards ahead on the road. Furthermore, at these high speeds, vehicles tend to lose grip and skid when the driver suddenly applies the brakes or takes a turn.

High speeds, however, significantly amplify even minor vehicle swaying. The centrifugal force can throw off small movements to the left or right. Instead of taking a small curve, the car ends up veering out of control. When this happens on roads where there are no guardrails or barriers to slow down the vehicle, the accident results in fatalities and serious injuries.

Drivers should recognize that, when it comes to speeds on the highway, more is not better. Higher speed limits can make drivers feel safer about roads with open lanes and clear visibility ahead but, in reality, they only lead to more fatalities.

Drivers should always pay attention to what is going on around them and be aware of other drivers on the road. They should not assume that other motorists will do the right thing while they are concentrating on their speed, for instance.

Keeping a Safe Distance Between Vehicles

Drivers should maintain enough distance from the vehicle in front to have time to apply brakes if necessary. This entails giving at least 15 feet of space or one car length when stopping behind a crosswalk or another vehicle. If another driver negligently causes an accident, a motorist can pursue compensation, starting with the search of a “personal injury lawyer near me.”

Drivers should always use their indicators to let other drivers know that they are planning to do something with their vehicle. Whether it’s switching lanes or driving off onto an exit ramp, drivers should always use proper signals. They can also tap their horn lightly, if necessary, to avoid collisions with the following cars.

Avoiding Driving Under the Influence of Alcohol or Drugs

Intoxicated drivers are more likely to flaunt speeding rules. Drivers should avoid drinking alcohol or using prohibited substances before getting behind the wheel. Even some over-the-counter (OTC) and prescription medications could impair driving. Drivers should, therefore, ask their doctors about possible side effects of medications, especially those that affect driving abilities.