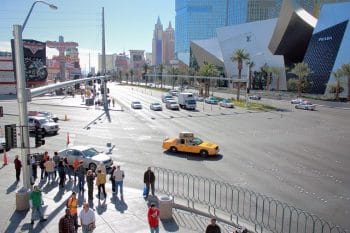 Almost all crashes that happen in Las Vegas’ most dangerous intersections are preventable. Drivers need to make safer decisions and avoid dangerous driving behaviors to prevent these accidents that can cause serious personal injury or death.

Las Vegas is Home to Many Busy and Dangerous Intersections

More than 42 million visitors come to Las Vegas each year. When adding in over 640,000 local residents, it is no wonder that roadways are congested, and dangerous intersections exist. Car crashes in Las Vegas are 18% higher than the national average. In 2018, car crashes caused 331 fatalities on the road and the number is only expected to increase. Many of these accidents happen at busy and dangerous intersections.

There are several reasons why so many of the city’s intersections are extremely dangerous. The city has higher speed limits that limit driver reaction time if another car is suddenly turns, stops, or runs a red light. There is also the pedestrian factor with so many crossing at intersections.

The Las Vegas Metro Police Department (LVMPD) has identified five of the most dangerous intersections where the most collisions occur in the city:

How Drivers Can Avoid Being in an Intersection Accident

One way to avoid being in an intersection accident is to avoid dangerous intersections. However, this is not always practical is doing so causes a long detour. Instead, common sense actions can help drivers avoid becoming another accident statistic like not speeding or tailgating and wearing a seatbelt.

Drivers need to slow down as they approach an intersection and not run red lights. When entering the intersection, they should look around to make sure that there are no pedestrians entering or cars that appear ready to run their red lights.

What Should Drivers Do After a Car Crash?

Drivers or passengers who are injured in car crashes in dangerous intersections in Las Vegas should seek immediate medical treatment. When possible, these individuals should get the names and phone numbers of any witnesses to the accident and take photos of the accident scene. Having this information can assist your personal injury attorney with gathering evidence for your case.